Since from my beginning i felt the need to develop bamboo rods able to join high performances but at the same time able also to show the natural bamboo verve. So the idea was not to bring inside bamboo rods the graphyte character, but rather give to my bamboo rod its own personality, first of all in term of action and usuablity on the river and then also from an aesthetical point of view.

That’s why i spend most of my time working of taper projectation, testing them on the river and if needed back to the workbench and modify the taper. I prefer approach the rodamking in this way, rather than reading thousands of books to learn the story of rodmaking. As a famous musicians said: “if i dedicated my time studying the music i shouldn’t have time enough for playing music”.

So in this neverending research of the “perfect” taper i have been very fascinated by the work a Michael Montagne, both as rodmaker and as innovator. This doesn’t mean that i liked the action of his rods but maybe he showed the way that better than other could bring me to what i was looking for. At that time i still thought that stiffness meant fastness. Fortunatly since that time i discover and studied other concepts that help me to have a more deeper under standing about how a taper behaves from a dynamic point of view (natural frequency, ways of vibrations, reactive rod and more).

In fact rectangular shape in my mind sounds like high frequency, and reactive rod, so i investigated a bit deeply how this shape could impact on the action of a bamboo rod. I wanted to try to make one, but at that time i had no money enough to buy the special planing form required, so i started to think a way to get to a similar result using the normale 60° planing form. Suddenly a widened hex shape appeared in my mind

A widened hex should behave almost as a rect quad shape and i was not believing the fact my mind got a so wonderful idea. I couldn’t resist and i talked to the Gabriele Gori (President of Italian Bamboo Rodmakers Association) about my thinking regarding the widened hex shape.  He stopped my enthusiasm when some day later our conversation he sent to me the Issue n.79 2003 of the the Planing form Newsletter where Mr. Bill Lamberson wrote an article titled “The many face of a Split cane rod” and of course between them there was also the Widened Hex.

After some disappointment  caused by the fact that i didn’t have an original idea i got in contact with Mr. Lamberson and Dr Wolfram Schott, cause i knew that both have made experience of this kind of shape. The conversations had with these two gentlemen in one hand confirmed to me what i thought about Widened shape in term of increasing the rod performances, in the other hand they showed me also the weak points of this shape.

The widened hax guarantees great stability and accuracy of the rod, it gives a great help to design reactive bamboo rod but it increases a little bit the weight and of course can have some limitation on some kind of casts, because the rods tends to bend always on the side where the guides are located (the wider side). A critical point to manage this situation is in the proportion between the two kind of triangles needed to obtain that shape.

As i have no engeeniring skills and as i don’t use software programs in taper projectation (i follow more the Payne style instead of the Garrison one) i needed at least a starting point from which start to build and experiment the results.. So i talked again with Gabriele and he sent to me the following conversion factors to skip from an hex shape to a widened hex keeping the same action of the rod. So this is was my starting point.

From here i have been playing 2 years thought trials and errors try to find my conversion factors as the ones showed here up didin’t satisfied me. Finally i got the right conversion factors (at least for my taste) able to keep the strengh points of the widened and to decrease the weak points of it.

In the meantime i started to apllied also this shape to bamboo ferrules. And since the first time i used them i saw the following adavantages compared to the standard bamboo ferrules:

I keep investigating them and soon i’ll be back on with a deeper report on them.

Here after is my Widened Hex Bamboo Ferrules (WHBF) Prototype. It’s a WHBF 6632-1 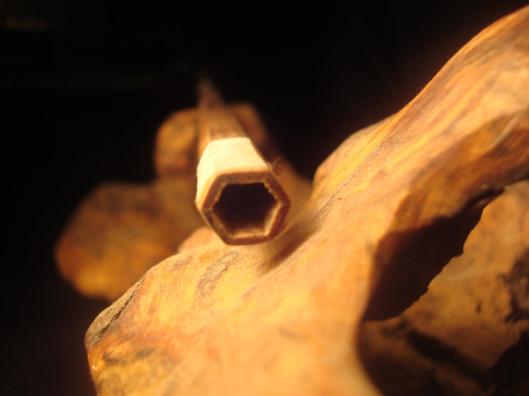