I got at home late on the thursday afternoon. White clouds showed their faces on that familiar sky and a light snow was falling down…so I found myself to the railstation where i left 10 days before. The home coming  hasn’t been so easy. More then 10 years from that terrible 9/11 but it seems to be closer than the calendar says. In fact as soon as i got to Newark airport, what i found was a big caos……”security reasons” keep repeating the metalic voice from the speaker.

As after i changed 4 gates finally i get in the flight that took me to Washinghton. “Wow…I thought…now it’s done”…Actually Washington saved another surprise for me. We were already on the flight heading to Rome, when the captain started to talk about some delayed due to the tecnical aircraft issues. The delay started to be longer and longer and finally the crue decided to tell us the truth. Change of aircraft is needed and we left Washington 2 hours and half later than the scheduled time.

So between the fly time and the waiting time, i had a lot of time to think about what my first experience to the Somerset Fly Fishing Show meant for me and for my rods.

As soon as i got home, kissed my wife and clean the buggages, i found my self with the faithful diary that I always carry with me on trips or during the days I spend on the river. It was full of ideas, considerations and little draws.

3 pieces bamboo rods? Mmmmhhh…why not? – new shapes for the grips?…it could be nice…and of course something else that is my mind since the last two years…making a Switch or Two Handed Rod to be used when my big dream will come true….Yes between my dreams there is one that is getting the first position on the agenda….catch a Steelhead or a Salmon on dry fly.

Reading what I wrote during a trip or a fishing day, help me to re-set ideas and feelings I had during the experience..and it also bring back on my mind some beautiful moment. During the days spent to New Jersey the beautiful moments have been a bunch. One year after the Patagonia Bamboo Week I met most of the guys with whom I shared that unfergattable experience and, yes, we had a great time…as we did one year before. 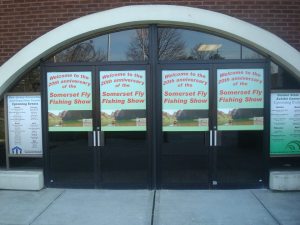 The show impressed me for the number of visitors and names of exhibitors…T&T, Hardy, Scientific Anglers and more and more…a big and fantastic frame where fly fishing addicted walked throught those booths like childrens usually do when they get in a sweets shop.

I felt like the country boy who goes to town for the first time. Surprised, doubtful … but with so much enthusiasm.

Our booth was the K27, one raw down to the casting pool. We dressed it very essential style and when it was finished it looked to us preatty good…so we named it “the Black Box”. During the 3 days of the show a lot of people came to watch, to talk and fortunatly some of them came to buy too.

The result was more or less what I aspected for my first time to a big show like that. New contacts, some sales, new friends…..and a bunch of new experiences to convert in improvements…..see you next year dear Somerset Fly Fishing Show.